10 Stackz released a new energetic single, “Pop My Shit” along with a visual to talk about his city and his brand as he ascends into the music industry. As a newer recording artist, 10Stackz is familiarizing the world with his sound and personality as a welcoming and fun-filled artist.  The upbeat tempo single follows up his recent singles, “Don’t Come Around”, “Drip” and “Fell in Love with A Freak”.

Birmingham, Alabama native is an emerging cool kid rapper creating hype music with superpowered energy that is encouraging and stamps that regardless of a struggle, one can create their own lane. In our interview below 10 Stackz discussed his inspirations the meaning behind “Pop My Shit” and more. Make sure you watch his new visual and check out our interview below. “Pop My Shit” is streaming on all digital platforms.

10 Stackz Interview on Voice It

Tiara – How did the journey with music start?

10 Stackz – I always loved music, and I was never good at sports, so I played in a band. After my brother died, I didn’t have anything else to do so continued to do music.

Tiara – What inspires you the most?

10 Stackz – Being myself, and the best dad. Making sure the people that I care about are in a good business position.

Tiara- What is your suggestions for the new comers?

10 Stackz – Don’t quit on yourself, if that’s something you want to get into, just do it.

Tiara – Who would be your dream collaboration?

10 Stackz – Drake, he has the protocol and formula. When people saw him from the beginning to now it’s an inspiration.

Tiara – What artists did you listen to growing up?

Tiara – What inspired you to make “Pop My Shit”?

10 Stackz – I wrote that song off of how I was feeling at the moment. It’s a song called Armed Robbery by MJG. My brother used to rap that song A Cappella when we were growing up and I used to think the song was made by my brother until I started listening and getting into music. I felt that record and I decided to make it my way.

10 Stackz – We have a lot of songs, I will continue to work and release music. 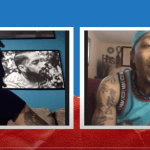