Monique Lawz is known as a singer/songwriter from the U.K. with Jamaican heritage. The North London native recently dropped her single called “Worth It,” featuring Wiley, also known as the Godfather of Grime, along with a visual that took place in Ocho Rico Jamaica. Monique is no stranger to the music industry. In (2017), the R&B star released a single called “U.F.U.,” (2018) “4 minutes”, “To The Bag,” “How You Like It,” and so much more. She also worked with a lot more significant artists in the industry. Pharrell Williams, Roddy Ricch, C.E.O. Dallas Martin, Marley Waters, Ms. Banks, Ray Blk, and more. In the interview, she also talks about growing up as an R&B singer in London, signing with a major label, and performing. Make sure you check out our interview below and download her music, which is streaming on all major platforms.

Tiara – How did you start as an R&B singer?

Monique Lawz – I always wanted to sing, I’m Jamaican descent, but I grew up in London, and we listen to so much music R&B, Hip Hop, Reggae, Country and more. Being surrounded by so much music I wanted to sing, I was also in a girl group at the age of thirteen, and It was four of us, I also studied music in college.

Tiara – Tell me about your single “Worth It” featuring Wiley?

Monique Lawz – It’s my first debut single signed to a major label, it was enjoyable we shot the video in Jamaica, people have been responding well to it. Wiley also has a single out now with Idris Elba called “boasty.”

Tiara – You also worked with Ms. Banks, and Ray Blk in the studio in the U.K tell me about that?

Monique Lawz – It was amazing, I have known Ms. Banks since 2015, she is always ready to work, her personality is fun, and she is powerful. I recently started writing for Ray Blk for her upcoming album. She has a similar power, strong female, I enjoy working with her. I love working with ladies, I don’t think it’s enough of us working in the entertainment industry it is male-dominated, and I think we can change the narrative.

Tiara – Will you be performing anytime soon virtually or in front of an audience?

Monique Lawz – I miss the energy, being in front of a crowd, and engaging with the audience. Online I can’t see people’s faces. Right now, with the COVID situation, but I would love to get back out to perform.

Tiara – What artist would you like to collaborate with next?

Monique Lawz – I would like to work with a lot of different artists. Tory Lanez, Nicki, I’m down to work with anybody who wants to work, as long as the vibes are organic. It’s so many talented musicians out there.

Monique Lawz – Warner Chappell is my publisher they’re amazing, they keep me busy. Warner Records is a good label, and I have a lot of creative control. I shot a video one day and co-directed I was very hands-on.

Tiara – How was it working with Pharrell Williams?

Monique Lawz – Pharrell sent me a tune, and I wrote to it, that was an extraordinary moment for me, he is the goat. I am the same with any top producer or writer that I admire I never take it for granted.

Tiara – What were your emotions like in the studio when you made “To The Bag”?

Monique Lawz – I still love that song to this day, my emotions are very free and open. I don’t hide anything when I’m in the studio, so it depends on the vibe. “To The Bag” was produced by Marley Waters. She worked with artists like Tinashe, DJ Mustard, Wyclef John, and more. At the time, I wanted to release the song to let the people know I’m still around. I been in the industry for a while but didn’t feel the need to rush to drop any music, and I make sure I take my time. It’s not a race; if you want the music to be right, you have to take your time. After “To The Bag” was release my friends were working on a movie called “The Intense” They heard the song, and said this will be perfect for the film, now the song is the soundtrack for the movie.

Tiara – What advice would you give the upcoming artist that are trying to breakthrough in the industry?

Monique Lawz – Everyone is going to have an opinion; there is no right or wrong to doing things. Trust your judgment, and your gut feelings this is your life people don’t realize we’re all going to be at the forefront. Be yourself, always do your research on the industry that you are getting into, and align yourself with people that want to build with you.

Tiara – Tell me about working with Roddy Ricch?

Monique Lawz – Roddy Ricch is fantastic and so dedicated. We met in Atlantic Studios in Los Angeles, and we were both playing music for CEO Dallas Martin. He told Roddy and me that we were excellent and we should write a song together. Within fifteen minutes, we began to freestyle over the beat, he would do his verse, and I did mine, everything was great. We have not dropped the single; we want to make sure everyone is ready.

Tiara – How do you feel about whats going on in the world today so far as the police brutality?

Monique Lawz – It’s so draining and unfortunate. It’s not just an issue in America. It’s worldwide; Black people have been fighting for equality for years. I have seen a lot of younger and older generations coming together and supporting black businesses. With my platform, I make sure I post and promote other companies. 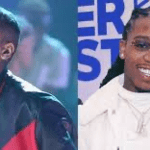