J. Manifest is one of the most sought after producers in the South, He’s a multi-talented mogul, and a mentor to many. The North Carolina native released a clothing line called Kickz N Snarez which has endorsed MP3 Waxx, and K97.5DJ Wade Banner, along with other well known artists in his market. Early on in his career, he worked with artists such as, J.R. Writer, Jim Jones, Cadillac Don, Shea Davis, Project Pat, Gorilla Zoe, Juvenile, Ricco Barrino, Lil Wayne, J. Money, and State House. In years following, J. Manifest has worked with Rick Ross, Yung LA, Wiz Khalifa, Beanie Sigel on several occasions, Money Bagg Yo, Anthony Hamilton, Elhae (“Stars”), Curren$y, T-Pain, Young Dolph, Colonel Loud, and MMG artist Scrilla on his “Gods Will” EP. In our interview below, J. Manifest mentions an upcoming new project with Jadakiss, his inspiration behind his label Legion OF Muzik and his journey to becoming a producer, and more. Make sure you check out our interview below.

J. Manifest Interviews on Voice It

J. Manifest – I Started getting into music around 1993. My oldest sister’s boyfriend was into music, they had a recording studio, and I just kept going since then.

Tiara – Tell me about your journey growing up in Rocky Mount, North Carolina.

J Manifest – Rocky Mount is a small town, most people don’t make it out of there, but the journey was kind of rough. So far as music, I had to stay consistent until I became one of the most popular guys in my town. Starting with rapping than I gradually ventured over and started making beats. From then on people in the surrounding cities started contacting me to pick up music.

Tiara – What inspired you to create your label Legion OF Muzik?

J. Manifest – I like to take the producers that have the talent, but they usually don’t have the resources to get to placements. So when I ship out beats that I do, I would take that young and motivated producer that’s talented and service his record and give him a gateway to try to land a placement. That is something I didn’t have when I was younger, and it took me longer, so I wanted to provide those services for upcoming producers.

Tiara – Tell me the meaning behind your new clothing line Kickz N Snarez and where can people purchase your merchandise?

J. Manifest – Drums is like the heart and the center of everything, and it is universal, I have a shop that is in the front of my studio where Kickz N Snarez can be purchased.

Tiara – What advice would you give upcoming artists and producers?

Tiara – Who are some of your favorite artists right now?

Tiara – Tell me about some of the artists you work with.

J. Manifest – I produced a couple of records for Rick Ross, but the most popular one was Drug Dealers Dream, which was on the Master Mine album. I always loved working with the MayBach Family. I was just in the studio with Jadakiss last week. I’m working with him on a new upcoming project. I worked with so many artists my list goes on.

Tiara – What are some of the things artists learn while working with you in the studio?

J. Manifest – I like to teach and develop the artists. I’m not in it to get your money because everything reflects on me. I also do educational seminars once a month at the studio just to enlightened people on the music business such as, taking care of their ASCAP, copyright, and making sure their music is registered the proper way.

Tiara – Who inspires you? and What keeps you motivated?

J. Manifest – My kids inspire me, sharing my feelings, and bringing people to my world with my beats and songs I produced. 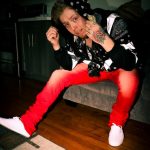