Kash Doll revealed she’s expecting her first kid yesterday (Thursday, September 23rd). She announced the news on Instagram a few days before the debut of Black Mafia Family (BMF), with the caption:

“The Lord just keep on blessing me! Look it’s a baby in there, and today it’s the bmf premiere! I’m so overwhelmed with joy #divineorder #Godstiming.”

Kash Doll stars in the drama series BMF, which is produced by Curtis “50 Cent” Jackson. She portrays “Monique,” a paralegal who works for a defense attorney. BMF is a documentary that covers the true story of the Black Mafia Family, a drug distribution network. Demetrius “Big Meech” Flenory and Terry “Southwest T” Flenory’s. Make sure you watch the Drama film, which airs on September 26, 2021. 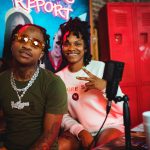