Drake recently sat down court side and discussing his new album with Broadcasting Jack Armstrong and Matt Devlin  that will be shorter than ‘ Scorpion’. Late last night Saturday (Feb 29, 2020) he dropped ‘When To Say When’, along with ‘Chicago Freestyle’ ‘When to say When’ has the beat from Jay Z previous song, ‘Song Cry’. which was release in (2001). Drake also release the official video for both songs. This visual takes place in Brooklyn New York, showing people on the street and different parts of the city, and Drake standing outside at night with the Brooklyn Bridge behind him wearing grey, and a Army Fatigue jacket. At the beginning of ‘Chicago Freestyle’ with Giveon singing in the background, Drake drives out of ‘The Embassy Estate‘ in a navy blue, and white Rose Royce driving through the city. Make sure you Check out the visual below. 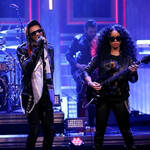