Da Baby album ‘Blame It On Baby’ goes platinum. The Charlotte native released his album on April 17, 2020 by Interscope Records and South Coast Music Group. Guest appearances by Ashanti, Megan Thee Stallion, Roddy Ricch, Future, YoungBoy Never Broke Again and, A Boogie Wit Da Hoodie. Da Baby earned 124,000 equivalent album units in the U.S. in the week ending April 23, according to Nielsen Music/MRC Data. Now he has officially sold over one million album-equivalent units, thus making it the first of his albums to secure the platinum distinction. It follows his second studio album ‘Kirk’ which was released on September 27, 2019, almost seven months prior. 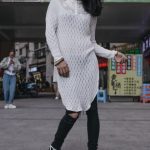