The album kicks off with an interlude from Zaytoven’s partner in crime, Gucci Mane praising Zay and his contributions to his career and the culture. Listen below. 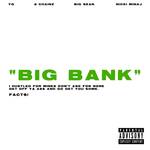