Remy Ma, a Bronx native, stars in BET’s American Gangsta. Remy Ma is a hip-hop performer and songwriter, who makes her acting debut as Delrhonda Hood, aka “Big Fifty.”  The initial film is based on the incredible true story of Delrhonda “Big Fifty” Hood, that has a larger-than-life personality who evolved from a street thug to a respected gangsta before finding forgiveness. 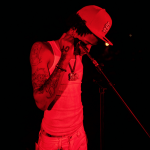